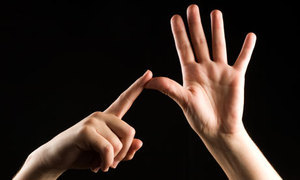 Sign language is a type of language that uses hand movements, facial expressions and body language to communicate. It is used predominantly by the deaf and people who can hear but cannot speak. But it is also used by some hearing people, most often families and relatives of the deaf, and interpreters who enable the deaf and wider communities to communicate with each other.

Since sign language is a language of its own, finger spelling or the use of manual alphabet cannot be used as an alternative to signing. It is used in signing but only for words with an non-existent sign or when the sign is not known. In addition, it would take hours to communicate a few minute message through finger spelling.

BSL can be learnt throughout the country at local centres for the deaf, community colleges and private organisations, many of which also offer online courses. Entry requirements vary from no prior knowledge required to National Vocation Qualification (NVQ) 6 BSL for those who would like to become BSL/English interpreters. In Scotland, BSL learning and teaching is regulated by the Scottish Qualifications Authority (SQA) which recognises three levels of BSL.

Please find the staff portraits/team photos alongside information on individuals within our organisation on this site and direct enquiries to the relevant person. All of our images are taken by an expert London corporate photographer to keep a consistent level of professionalism across the site.